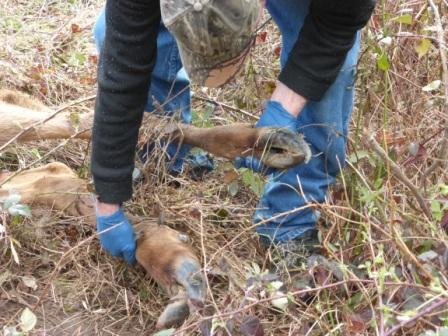 The more my family pried, the more we came to suspect that forest chemicals such as herbicides, adjuvants and fertilizers are either the primary cause or a chief contributing factor underlying elk hoof disease. At the very least, it seemed like a worthy hypothesis to study, and so we were surprised to learn that WDFW had never explored the connection, nor intended to. Rather, they have been content to pin the disease on bacteria that even their own technical advisers don’t believe to be the sole culprit.

As the unseemly ties between WDFW and the timber and chemical industries were revealed, it became clear to my family that WDFW’s integrity regarding elk hoof disease had been compromised. In one case, muckraking hunters helped prove that WDFW’s hand-picked herbicide “expert” was employed by a company that represents the manufacturer of Atrazine, an immunotoxic herbicide sprayed widely by local timber corporations even though it has been banned in many other countries for persistent groundwater contamination. Because of all this, my family was cautiously optimistic about the passage of Senate Bill 5474 earlier this year.

Unanimously approved by the state Legislature, SB 5474 was perceived by most observers as an official vote of no confidence in WDFW’s dismal researching efforts. Among other stipulations, the bill made Washington State University the new lead organization tasked with developing a program to “monitor and assess causes of and potential solutions for elk hoof disease.” Toward that end, the Legislature appropriated $1.52 million.

Unfortunately, my family’s optimism for WSU’s research is already sinking. Initial signals out of their College of Veterinary Medicine suggest that WSU intends to double-down on WDFW’s myopic and fruitless path of inquiry rather than include (at least, in part) a study of forest chemicals and related factors such as immunotoxicity, mineral deficiencies and water and soil degradation. This would be particularly frustrating considering that some of WSU’s own hoof disease technical advisers have agreed with the public that the investigation needs to have a wider environmental scope.

“(WDFW researchers) are mentioning lots of different bacteria. That’s one piece of the puzzle,” said Dale Moore, an expert in preventive veterinary medicine at WSU. “But there are other things that seem to be missing in the puzzle. Big pieces. The big pieces are the environmental factors and why this particular region and not other regions.”

As WSU researchers continue onward with their investigation, I hope they will remember that the funding for this special research was largely due to the tireless advocacy of citizens like Mark Smith and Bruce Barnes who are named in the SB 5474 documents. I also encourage WSU to understand that the people who live and work and recreate in the areas affected by elk hoof disease have been dealing with it for over a decade and are impatient to finally see their suspicions investigated with scientific rigor.

My family urges hunters, conservationists and concerned citizens to continue to pressure your local representatives and especially WSU’s College of Veterinary Medicine now that they lead the hoof disease investigation.

Let them know that you’re paying attention and that you expect some of your $1.52 million in taxes to go toward an honest and thorough study of the link between forest chemicals and elk hoof disease.

I may never get to pack another elk out of the woods with my dad or uncle, but if we stay devoted to rehabilitating our local herds, I’ll hopefully get to pack one out with my son or daughter someday.

3 thoughts on “Will WSU Study the Link Between Herbicides and Elk Hoof Disease?”